Although I had attempted to sleep in on Saturday—no alarms were set—I woke up at 8:00 A.M. this morning, hot and confused. The night had been the hottest since I had arrived here, and the lack of fans or air conditioning did not help.

However, using the early wake up to my benefit, I began to walk down to the Obelix to grab a quick breakfast, where I met Kate. Kate was the first dig member I met in Italy, as she picked me up at the airport just three weeks ago. Her fourth year as a member of “Dig Umbria,” she knew the city of Orvieto better than most. Fortunately, the bus to the city arrived just as we were finished with our chocolate croissants, and we took off at around 10 A.M.

Having visited the city of Orvieto two weekends ago with Bliss, I thought I had completely absorbed every street, every corner of the city. Boy, was I wrong. Rather than visiting the large tourist sites (the well, the clock tower, the Duomo, etc.), Kate and I stopped by the smaller stores and I was amazed (Kate had been there before). From ornate plate stores to antique paintings, Orvieto had everything.

One shop that we visited sold ancient Etruscan artifacts on jewelry. Necklaces, bracelets, anklets, and more with authentic artifacts made up the small, but expensive store. While thinking about the Etruscans, we stopped by the Temple of Belvedere again, and this time, the overgrown grass had been mowed. The steps became much clearer and the stones that rested on top of the small hill were clearer as well (in the photo gallery, you can see it for yourself). We continued walking down that path, and contrary to my previous belief, there was a beautiful trail that outlined the backside of the city. On the trail, there were play places such as a hopscotch course, a playground, and a wobbly stairs course. It was quite the site attempting to cross these stairs while marveling at the amazing view from the city that was to the right of me.

After stopping at the end of the trail, we walked over to the Archaeological Museum of Orvieto, where I had what I could call an eye-opening experience. At the museum were rows and rows of perfectly intact pottery and terracotta—something that I could only dream of pulling out from the ground. For instance, a couple days ago, I recounted that I discovered a piece of architectural terracotta that had a clean nail hole straight through it. At the museum, I was amazed to find pieces of architectural terracotta that were larger than my shoulders, that had intricate designs carved in, that had not one, but multiple nail holes. To be completely honest, it was slightly embarrassing to remember that I had been so, so excited to find such a small piece.

This feeling continued, as we walked through the coin section of the exhibit. As you can see in the photo gallery, there were most literally an insane amount of coins simply piled on top of each other. Some of the notable faces I recognized on the dates of the coins were Emperor Tiberius and Augustus.

In another section of the museum, I got to see works collected from Crocifisso del Tufo, where Bliss and I visited several times in the past three weeks. There, I gazed at several remarkable pieces of attic pottery and inscriptions. It was mind blowing to think that we had been to the place, maybe even stepped on the soil, under which these artifacts sat.

Another section of the museum were artifacts from the Temple of Belvedere. Now fully excavated, the temple had several statues that decorated the exterior. Some of these were completely intact.

Near the exit of the museum was a large stone structure that had an Etruscan inscription. This structure was especially significant for archaeologists because it showed that women, in Etruscan society, had the right to possess property, a stark contrast from the custom of the Romans. Romans were believed to have detested and mocked the gender equality (or closer to it) that the Etruscans practiced. The mere fact that Etruscan women could dine with men baffled the Romans.

All in all, I am sure that the museum would not have left the same impression on me—the shock, the disappointment, the amazement, the joy and everything above at once—if I had not completed three weeks of excavation.

After the museum, Kate and I stopped by the Cibus, where Bliss and I ate two weeks ago, and had a delicious lunch. Feeling adventurous, we ordered an octopus appetizer. I highly suggest it!

After an eye-opening morning and afternoon, I figured it was time to head back to the convent. Uphill and downhill, we followed the routes to the convent and returned at around 4:00 P.M. Still early in the day, I was happy to have time to reflect and rest. It was also nice to have some free time to enjoy my non-archaeological hobbies—I listened to music, and wrote as I looked at the Orvieto view.

Sunday began similarly, as I took the bus to the city, but this time with Kelsey and John. Realizing that this trip would be the final one to the beautiful city of Orvieto, I finished up my souvenir shopping and said my goodbyes to the winding streets.

Before I left, however, I visited the interior of the Duomo. I thought that one of the most interesting parts of the remarkably intricate building was the painting in the left transept. Unlike most paintings portraying the crucifixion of Jesus, this one showed the two that were killed next to him. After the visit, we made our way to a famous gelato place nearby, and looked at the magnificent cathedral while eating magnificent dessert.

Overall, the day was more of a rest day than anything, and I returned to the Obelix at around 2:00 P.M., and ate the Topolino for lunch while gazing at the hilltop city I grew to love so much.

Afterwards, I walked up to the convent, rested and ready for the final week ahead. 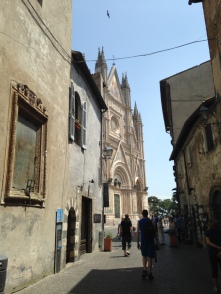 The winding streets of Orvieto 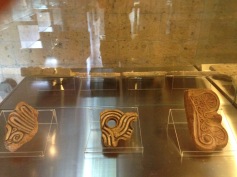 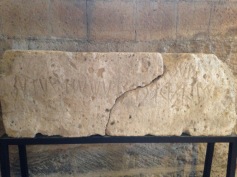 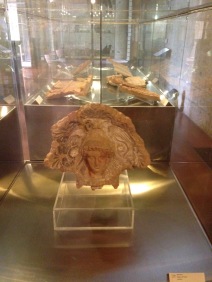 Sculptures found around Temple of Belvedere

Bust of praetor of Etruria, Sabinus

Plethora of coins at the museum 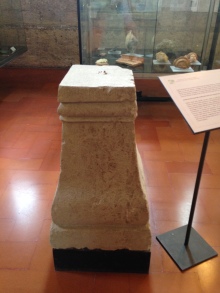 The Etruscan inscription on an offering of a woman 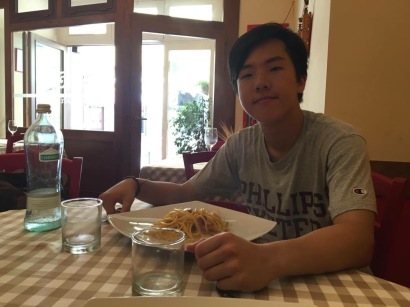 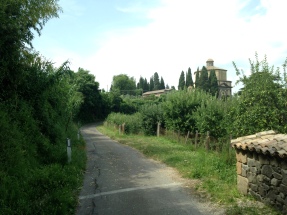 Walk back to the convent

Walk back to the convent 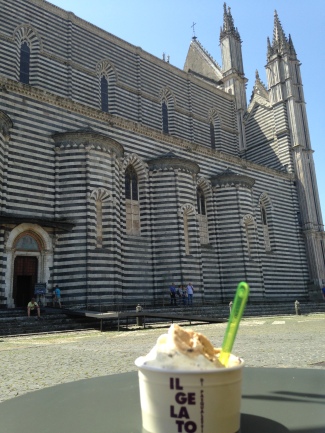 Il Gelato near the Duomo 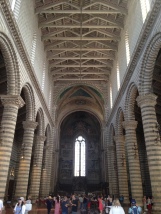 Interior of the Duomo 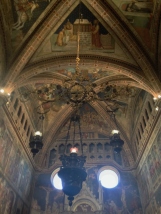 Painting of crucifixion in left transept of cathedral

Ceiling of the Duomo

My Topolino lunch at the Obelix

A multi-media account of my studies in the Maya heartland.